Rose Law Firm, the oldest law firm west of the Mississippi River, traces its origin to November 1, 1820, before Arkansas statehood, when Robert Crittenden and Chester Ashley entered into an agreement for a “Partnership in the Practice of Law.” This partnership agreement hangs on the wall of the firm’s boardroom as a reminder of our long and storied history.

Our mission is to create long-term value for our clients by providing innovative, personalized legal solutions delivered through our commitment to excellence.

At the age of 22, Crittenden was appointed as Lieutenant Governor of the Arkansas Territory by President James Monroe, and he was responsible for organizing the new Territory. Crittenden governed the Territory for more than a year until the arrival of Governor James Miller. Ashley and Crittenden dissolved their partnership in 1832.

Ashley was joined in the practice of law by George Watkins in 1837. In 1844, Ashley was elected to the United States Senate and served as Chairman of the Senate Judiciary Committee. Watkins became the Chief Justice of the Arkansas Supreme Court in 1852. 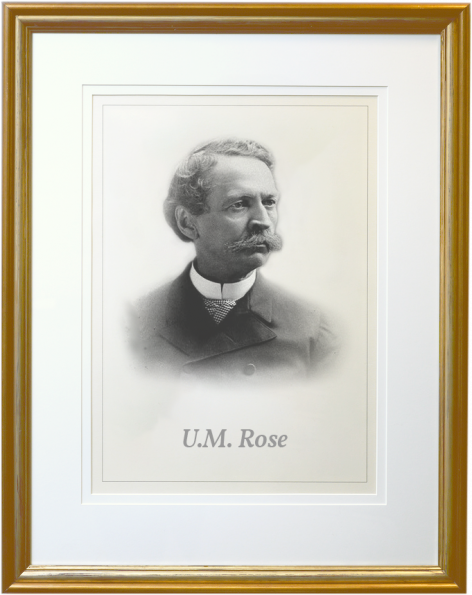 “Rose” was added to the partnership name in recognition of the addition of U.M. Rose, who was a student of history, science, philosophy, and literature, as well as an accomplished lawyer and linguist. As one of the founders of the American Bar Association, U.M. Rose was elected its president in 1900. President Theodore Roosevelt appointed Rose the United States representative to the Second Hague Peace Conference in 1902. His accomplishments and contributions to his country were recognized by the placement of his statue in Statuary Hall in the United States Capitol. U.M. Rose died on August 12, 1913. In 1958, United States Supreme Court Justice Felix Frankfurter wrote: “In my early years at the bar, U.M. Rose was one of the luminaries of our profession – not merely a very distinguished practitioner but a highly cultivated, philosophic student of civilization and of the role of law and the lawyers in the progress of civilization. Mr. Rose inspired me in my formative years as a lawyer.”

U.M. Rose’s son, George B. Rose, joined the partnership in 1881 and brought to it his photographic memory, command of six foreign languages, and passion for art. He was the author of the book titled Renaissance Masters. George B. Rose practiced until his death in 1943 at the age of 82.

Wilson E. Hemingway resigned as a justice of the Arkansas Supreme Court in 1893 to become a partner in the firm of Rose, Hemingway and Rose.

Years stated below in parenthesis denote tenure with the firm.

Meek was the principal author of many of the banking, commercial, and inheritance laws of Arkansas. Nash, a former Dean of the Arkansas Law School, became an authority in municipal finance and authored many legislative proposals including the establishment of the Arkansas Industrial Development Commission and constitutional amendments relating to industrial finance.

George Rose Smith, the grandson of U.M. Rose, was elected to the Arkansas Supreme Court in 1948 and thereafter became its longest-serving justice. Gaston Williamson joined the firm in 1949 and became the preeminent authority on inheritance and estate planning in the state of Arkansas. He was elected President of the Arkansas Bar Association in 1968.

Although the name of the firm has changed a number of times since 1820, the firm has retained the “Rose” in its name since 1865. In 1980, the firm changed its name for the last time to “Rose Law Firm, a Professional Association.”

Six of the firm’s former members served on the Arkansas Supreme Court, three as Chief Justice. It remains the only firm in Arkansas that has had as many as six members honored to serve as President of the Arkansas Bar Association. The firm’s former members include a past President of the Little Rock School Board, a past Arkansas State Representative, and the past president of the National Conference of Commissioners on Uniform State Laws. Former member Hillary Rodham Clinton went on to serve as First Lady of the United States, U.S. Senator, and U.S. Secretary of State.

The present firm membership continues this tradition of public and governmental service and activity in civic and charitable organizations. Present members of the firm include two former presidents of the Pulaski County Bar Association; a former United States Bankruptcy Judge; a past President of the National Association of Bond Lawyers; and the recipients of three of the annual Outstanding Lawyer Awards of the Arkansas and Pulaski County Bar Associations.